Poor employment prospects and frustration with omnipresent dictatorships among youth fueled protests throughout the Middle East in 2011. Tunisia was the first country to shed its dictator during the season of Arab uprisings, sending shock waves throughout the region. A few Tunisians who had left their country in search of opportunity, education or freedom came back to help determine the course of the country’s democratic future.

“My mother said I had a calling,” says Omezzine Khelifa, who left a successful finance career in Paris to return to her homeland during this historic time. Born and raised in Carthage, Omezzine had lived abroad for over a decade, working for financial institutions such as Société Générale Corporate and Sophis after completing her engineering studies at ENSIMAG in France.

Initially, Omezzine tried to help the movement in Tunisia from afar, gathering with other young expatriates in Paris to discuss the revolution and their potential involvement. But it was hard to ignore the feeling that she needed to physically take part in the wave of grassroots activism. Despite her circle’s political consciousness, it turned out she was the only one who decided to take action on the ground.

Revolutions can happen anywhere and within anyone. For Omezzine, her own personal transformation was just beginning. In January 2011, she walked away from family, friends, job security, a home and an adoptive country, without a plan or any regrets.

“It was a time for people who were raised by Tunisia to give back to Tunisia.”

“It was a time for people who were raised by Tunisia to give back to Tunisia,” says Omezzine. “I was ambitious and idealistic enough to think I could prevent the revolution from going backwards. I needed to be there.”

Back in Tunisia, Omezzine jumped into the fray, attending conferences, meeting with various political and civic groups, listening to public debates and forming alliances. She found openness in the newfound freedom of speech, especially among the youth, and opportunity through “hard work and the right connections at the right time.” Within a month, Omezzine knew her role would become political — as a voice for underrepresented women and youth.

“I was convinced that in order to have the biggest influence I had to be part of a political party that shared my values and was flexible enough so I could help shape its political line and vision,” says Omezzine.

Her party of choice: the Ettakatol party, the Tunisian social-democrat party, one of the three parties of the governing coalition. In 2011, she ran as a candidate in the Tunis district for the National Constituent Assembly elections. Although she failed to win the seat, she was named a senior adviser to the Minister of Tourism in 2012 and to the Minister of Finance in 2013. For her work, she was also honored with a Leader in Democracy Award by the Project on Middle East Democracy NGO in 2012 and as a Young Global Leader by the World Economic Forum in 2014.

Omezzine on Election Day in 2014

After her failure to secure a parliamentary seat for a second time in 2014, Omezzine reevaluated her work. As a political activist, she had learned that the democratic process would be a learned one for present and future generations.

“It’s a challenge for a country that is not used to having diverse opinions expressed,” says Omezzine. “Building consensus is the hardest thing but at the same time, you can’t do anything if you don’t have a group that shares values and one leading vision that allows you to move in the same direction.”

Many voices — including those of the youth and women who had been so instrumental in bringing about the revolution — were often left out of the political conversations, especially in negotiations and decision-making. Seeing the disenfranchised and their continued economic and societal plight gave Omezzine the idea to start Mobdiun, an NGO initiative dedicated to empowering and including marginalized youth in the new democracy. Mobdiun works with boys and girls, ages 9 to 15, “to stimulate their creativity and strengthen their inner resilience, self confidence as well as critical analysis.”

Omezzine in front of a school talking to a student’s mother during the 2011 electoral campaign.

Tunisia is demographically speaking, a young country: more than half of the population is under 35. It is also the group hit the hardest by unemployment and economic woes: 30 percent of those with university degrees are out of work. Self-reliance, initiative and innovation are critical to finding — or creating — employment for the next generation.

“Youth shouldn’t see violence in a bad economy as a way of earning money or getting back their rights.”

“Public services can no longer absorb the 72,000 students who exit university each year,” says Omezzine. “Youth have to be creative about creating their own jobs. They shouldn’t see violence in a bad economy as a way of earning money or getting back their rights. We would like a solid and stable democracy and for all citizens to be and feel a part of the community.”

Mobdiun uses art, culture and sports to expand their horizons outside of the classroom. While Tunisia provides free and mandatory public education for children ages 6 to 16, it is based on a curriculum inherited from the dictatorship. “It produces people who can follow, people who can execute,” says Omezzine, “but it doesn’t encourage creativity, originality and the spirit of innovation.” Mobdiun’s activities encourage youth to be champions of change and leaders in their communities, rather than victims of circumstance.

Although the revolution brought a lot of hope to citizens of all ages, it has left the youth without hope in the aftermath. The lack of opportunities has produced some alarming statistics: Tunisia has exported the highest number of ISIS fighters than any other country and faces a worrying increase in suicides among children and teenagers as well as a surge in civilian flight.

“Youth have no leisure, no economy power, no decision making in the political sphere,” says Omezzine. “And in society, they are told what to do and they’re not allowed to express themselves if they’re not happy.”

Mobdiun is in essence dedicated to protecting the values of the revolution of the youth: the potential for change and opportunity. The fate of the country still lies in the hands of the youth and their role as future voters and leaders. They are the next wave of grassroots activism and the vanguard going forward.

“I see the future of my country being built by them… Let’s bring a peaceful set of tools to those who can bring this positive change to a modern Tunisia where all citizens are part of the community.”

“I’m just an intermediary,” says Omezzine. “I see the future of my country being built by them. It is the huge numbers of people that make the change. Let’s bring a peaceful set of tools to those who can bring this positive change to a modern Tunisia where all citizens are part of the community.”

Is there an article or piece of writing you’ve read lately that you’d recommend?
An old article by Noam Chomsky written in 2001, just after 9/11 but still so accurate. 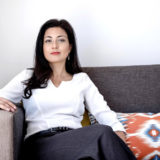 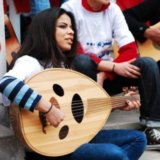