Frustrated by democracy’s ongoing debate about the relationship between the government and the governed, former Massachusetts Congressman Barney Frank once quipped that “government is simply the name we give to the things we choose to do together.” Yet, democracy, the system of national governance long seen as most respectful of individual rights, most resilient in the face of change, and best able to provide, appears to have lost its luster. Whether in Europe, Asia, Africa or the Americas democratic norms appear to be eroding, its institutions challenged if not undermined.

Once the standard-bearer of human rights abroad and civil liberties at home, in 2018 the US has experienced the most precipitous decline in citizen trust of any country surveyed by the Edelman Trust Barometer at any time, while China has experienced the greatest rise.

Moreover, elections in democracies as far-flung as Hungary, Poland, the Philippines, Mexico and Brazil suggest a trend toward nationalist populism – resulting in illiberal democracies where the vote is sacrosanct but an embrace of pluralism is not. In part this outcome reflects citizens’ response to the pressures of globalization, and the apparent inability of political leaders to address intractable problems—such as inequality, mass migration, climate change or race relations.

In the face of this perceived dysfunction, citizen leaders on all continents have turned to community solutions. And philanthropists – once obsessed with scale — have increasingly embraced a new localism. They complement their “big bets” with a focus on localities where collaborative problem solving is most visible; the opportunity and need for cross-sector engagement is most apparent; and the reality of mutual dependence is inescapable. Community life entails repeated experiences in reasoning, compromising, and taking decisions together — the basis on which civic culture is built.

At the 2019 Global Philanthropy Forum, we explored ways the next generation seeks to give vitality to democratic norms and modernize democratic institutions. We learned about the experiences of communities where inventive solutions have been crafted, ethical and inspiring leadership has been shown, problems have been solved and social capital has been built. In short, where democratic decision-making has worked. Examples came from Latin America, Africa, Europe and Asia—as did the philanthropists and social entrepreneurs who joined us.

In the end, we may not have concluded that government is the word for the things we do together—but rather self-governance is. And we may have found that an investment in the processes of democratic decision-making is the ultimate “big-bet.”

After all, the only way to scale democracy is by example. 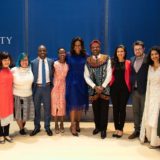