Ten years later, former President Obama’s inaugural group of “Obama Foundation Scholars” — a group of 25 young leaders from around the world — is working toward change on a wide range of ubiquitous issues, from health care and economics to social change and refugees’ rights. Some are taking classes at Columbia University, while others are studying at the University of Chicago Harris School of Public Policy. On Saturday, five of them visited Sag Harbor, where host families offered accommodations and the John Jermain Memorial Library sponsored a welcome breakfast.

“You guys are my dream people tying the world together,” said Ken Dorph, a Sag Harbor resident and managing director of a consulting firm that has worked internationally on issues including economic development.

Mr. Dorph has worked with Omezzine Khelifa, one of the Obama Scholars, who is from Tunisia and who founded a company called Mobdiun – Creative Youth, which she said works with youth in Tunisia and throughout Africa to “inspire peaceful and creative change leaders.” Ms. Khelifa recently visited Sag Harbor and thought her fellow scholars would enjoy a visit as well.

Joining her last weekend was Alice Barbe of France, the chief executive officer and co-founder of SINGA France, which operates business incubators that help refugees connect with their host societies by building on the refugees’ professional, cultural, personal and entrepreneurial plans and goals. Also visiting was Gabriela Galilea of Paraguay, the chief executive officer and founder of Okimo Vision Ltd., a company she started based on her own visual impairment, which improves access to visual health care, diagnosis, treatment and education. Hong Hoang of Vietnam, founder and executive director of an organization called CHANGE, which promotes environmental preservation and encourages youth and community involvement, also visited Sag Harbor. Ana Maria Gonzalez-Forero of Colombia visited the village with her two children, Rodrigo and Rosario. Ms. Gonzalez-Forero is the chief sustainability officer of Fundación por la Educación Multidimensional, which enables development in Colombia through “participatory planning and design processes” among diverse stakeholders.

Before breakfast, the group toured the John Jermain Memorial Library. Library director Catherine Creedon pointed out the crack in the first-floor entrance area, a result of the hurricane of 1938. It was filled in in 2015 with shining brass and bronze, made possible by a patron’s donation and a community member’s workmanship — evidence that even “broken” can be beautiful and the right kind of care and collaboration can solidify the future. The lesson seemed to sink in as some of the Obama Foundation Scholars snapped cell phone photos.

Over breakfast, the scholars introduced themselves and mingled with community members.

“I love it here,” Ms. Hoang said. “At first, I thought Sag Harbor was a fashion brand. I will live here when I retire. Save me a piece of land.”

When she introduced herself, Ms. Barbe said “the most valuable asset is that we are together” in this program, learning from each other and networking.

Ms. Gonzalez-Forero said the Obama Foundation Scholars program is a great opportunity for her to bring her work to a different level and to different communities.

“What they are trying to do is identify people worldwide who are having a certain type of impact, so that their impact can be amplified and replicated,” she said. “In that sense, I think it’s going to be a very effective program.”

Correction: An earlier version of this article misstated when the crack in the floor was repaired and who contributed to its repair. It has been corrected. 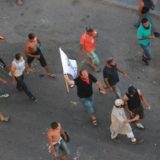 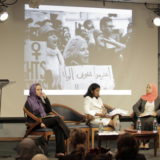 No Arab Spring Without the Flower of Womens Rights